In the 1950s, manufacturing industries prospered in Hong Kong. Textiles, plastic wares and garments became the backbone of Hong Kong’s manufacturing sector. A growing demand for labour workers resulted in an increase in the number of injured workers from industrial accidents. Due to a shortage of orthopaedic surgeons and rehab workers in Hong Kong, Prof. Harry FANG Sin-yang, the founder of The Society, along with leaders of the community, founded the Hong Kong Society for Rehabilitation to provide injured workers with rehabilitation and vocational training services. Prof. FANG also started lobbying the Government for a change in Hong Kong’s social welfare and rehabilitation services. He soon realised that the obstacles encountered by people with disabilities, such as the difficulty of travelling, could not be tackled solely by rehabilitation services.

In the early days of Hong Kong, the public transport system was not well-developed, and the idea of accessible transport was quite novel to the public. People with disabilities often encountered obstacles when travelling. As Prof. Harry FANG Sin-yang was well aware that a lack of social life is unhealthy, we organised picnics to encourage people with disabilities to hang out and socialise with others. Before the emergence of an accessible transport service, we had to use centre vehicles and staff members’ private cars to take them on a trip. The idea of starting the Rehabus service soon came into being because of this experience.

In 1974, the Hong Kong Government approved the construction of the Mass Transit Railway (MTR). Prof. Harry FANG Sin-yang, together with Dr. LAM Sin-fook, suggested the installation of a lift at every metro station to facilitate access for people with disabilities. Despite the rejection of this proposition, it did not discourage us. Rather, it strengthened our determination in starting an accessible transport service. Ms Rose GOODSTADT, our committee member and a Government official, mediated and helped reach a consensus, which eventually led to the start of the Rehabus service.

Rehabus: The Start of Accessible Transport

Mr. M B LEE, the then honorary treasurer of The Society, was appointed as Chairman of the Rehabus Management Committee after the Committee was set up. Meetings were called to discuss and look into the routes in preparation for this new service.

Father John COLLINS, Mr. Joseph KWOK Kin-fun (the then General Secretary of the Joint Council for the Physically and Mentally Disabled in Hong Kong) and Mr. Peter LEEDS, the Commissioner for Transport attended the meetings.

In July 1978, the first Rehabus route was launched as the first self-financed accessible transport service in Hong Kong. In the early years, Rehabus was supported by generous donations for the purchase of new buses and for recurrent expenses from various charity funds and commercial organisations, such as the Community Chest, the Hong Kong Jockey Club and the MTR. Since 1980, the service was subvented by the Government and managed by the Social Welfare Department. In 1987, the overseeing of Rehabus was turned over to the Transport Department. 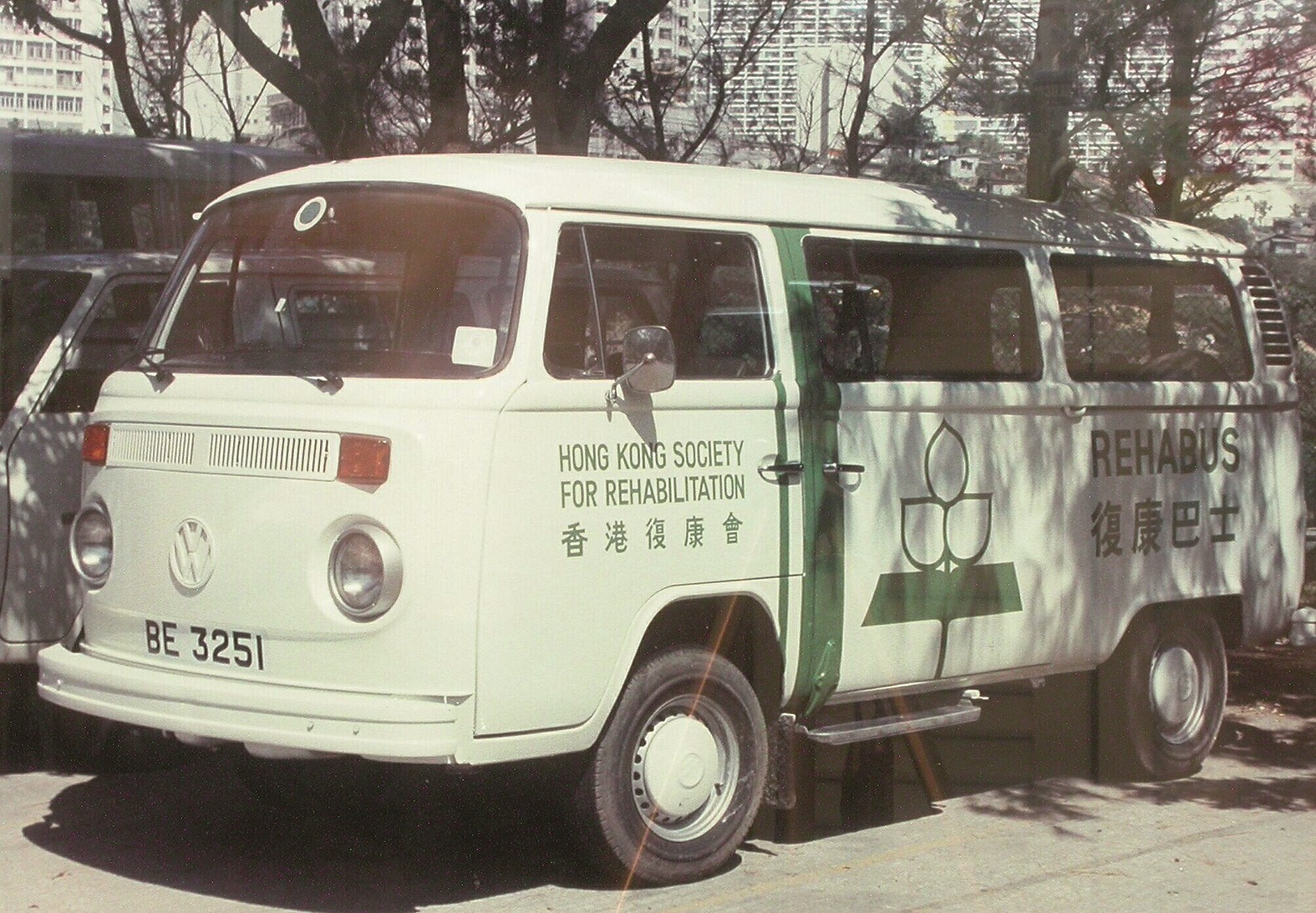 Rehabus – An Assembly of Men of Talent

However, Mr Rex LUK Chi-keung, the Sunshine of Rehabus, was also the one who played a crucial role in the development of Rehabus. His dedications in the ensuing decades saw the success and achievements of this service. Rex first joined The Society in 1992 as Transport Manager of Rehabus and he was promoted to Director of Rehabus in 2006. Rex dedicated his life to Rehabus. Not only did he give advice on the design and equipment of the vehicles, but he also unconditionally shared his experiences of accessible transport with local and overseas organisations. For example, he was a member of the organising committee of the International Conference on Mobility and Transport for Elderly and Disabled Persons (TRANSED 2010), which took place in Hong Kong, connecting Hong Kong to the international community of accessible transport. He had also left his mark in Singapore, Guangzhou, Shenzhen, Chengdu and Taipei, changing the lives of many. His lifelong dedication to promoting accessible transport and travel saw the bus fleets which doubled its size and shone a light of hope into the darkness for others in need.

In the early days of Rehabus, there was only a second-hand vehicle providing service due to limited resources, but The Society has always striven to optimise the service and to install safety equipment to cater to the needs of passengers. Against the backdrop of an ageing population and an early onset of chronic illnesses, accessible transport service is of paramount importance and the expansion of our bus fleets is our top priority. Currently, The Society hosts a fleet of 176 Rehabus vehicles and hires over 200 bus captains to provide regular commuting service for work, school, medical appointment and socialisation. With the largest Rehabus fleet in Hong Kong, we serve a yearly attendance of nearly 1 million. Rehabus has not only set a precedent of accessible transport in Hong Kong, but it has also become a role model and an inspiration for neighbouring countries and territories.