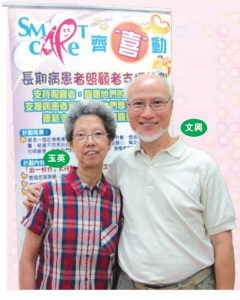 Yuying as a caregiver, her whole heart and mind were all invested in taking care of her sick family member, who in turn tend to neglect her own well-being and hence suffered from emotional distress. However, one of the volunteers Wenxing actively supported and cared for carers, so that they can put aside their shouldered burdens. As a result, Yuying was influenced by the enthusiasm of Wenxing that she also joined the rank of volunteer to help carers while continuing her own caregiving role.

When talking about volunteer service, many would think about the provision of services to the sick and the needy, but the service targets of “SMARTCare” are the carers behind these persons with chronic illnesses whose caring pressures are to be alleviated by the volunteers. The organization was founded around 3 years ago, and there are 20 to 30 core members. It has 3 teams of volunteers, including Community Service Team, Caring Call and Home Visit Team as well as the one-off “Let Love Grows” Volunteer Team. The interviewee Wenxing and Yuying had demonstrated to us the warmth within the family of SMARTCare.

Wenxing is a retired civil servant, and he has been volunteering since the founding of the organization, mainly responsible for the assistance in mental and social support services such as care call and home visit, sharing activities, housework services, as well as clerical support services such as hospital publicity, etc. He paid much importance to interpersonal relationship, that he lamented the alienation and coldness amongst people. Hence, he took great importance in establishing a long-term relationship with the carers, listening attentively to their words. When he witnessed the closeness between the patients and their carers, he would be happy for them heartily.

As for our volunteer Yuying, she had transformed herself gradually from a service recipient to a service providing volunteer. Her daughter suffered from brain cancer for more than a decade and had undergone three open brain surgeries, who thus have difficulties getting out of bed. As a mother, Yuying was desperate. At first she shut herself up and isolated herself from the outside world, and was diagnosed of mood disorders. Later she had learnt of the support service of SMARTCare. At first she thought that the service was to help her daughter, but instead she found out that it is for her as carer. After several gatherings, she began to reveal her feelings, and slowly she started to open up herself and express her emotions. Now she has learnt to let go, that she has once again the mood to take a stroll at leisure, paying attention to the surroundings. She described that volunteers were like her family, that with them she felt herself being cared and concerned.

Because Yuying was benefited from volunteerism, she wanted to reciprocate the community by helping and encouraging those who shared her fate. Therefore, Yuying became involved in SMARTCare volunteer services, and she shared her personal experience. Wenxing who stood beside her was also happy for her change and considered Yuying as a very successful example.